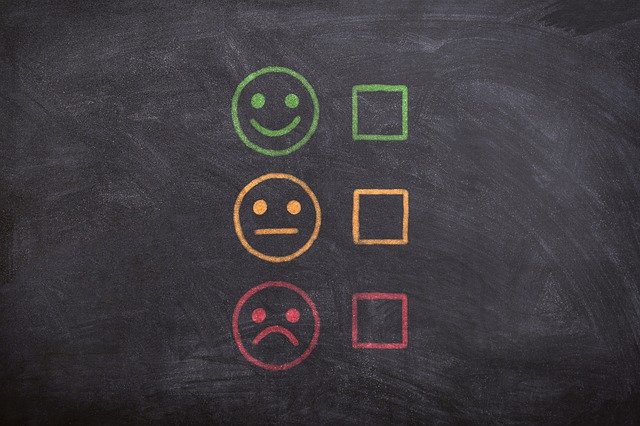 Earlier this month, ESMA published their Data Quality Report for EMIR and SFTR . The report was the first review since SFTR went live last July and follows similar annual reviews being conducted on EMIR since its inception in 2014. The review is part of a dedicated framework of analytical tools that ESMA has built to monitor the more than 10s of  million daily life-cycle submissions reported to trade repositories for both EMIR and SFTR.

On SFTR, ESMA notes that the regime was only launched recently and so presents a limited overview of SFTR data quality. It notes that all relevant stakeholders (counterparties, TRs, NCAs and ESMA) need to set aside sufficient resources to monitor data quality thoroughly.

Overall, this review provides a glimpse of areas being focused on by ESMA. For investment firms and other market participants, the findings are interesting as ESMA’s analysis gets passed on to local NCAs who will use the framework defined by ESMA when conducting their checks on license holders within their jurisdiction.

Here are some initial findings mentioned by ESMA.

There has been good progress overall on EMIR data quality, and there was no major “disruption on the reporting ” under Brexit.  ESMA cited that daily submitted transactions fell by 50% post Brexit as UK firms no longer report into the EU. Brexit triggered one TR to suspend support for the UK, another two TRs closing in 2020, and firms being required to split their submissions to a TR in their jurisdiction.

Like EMIR, Brexit has also had a significant impact on the SFTR reporting landscape. In December 2020, more than 2 million open SFTs were reported by branches of UK reporting counterparties decreasing to 250 000 open trades beginning January 2020. The number of reports has been trending upwards since, as end January, we are now up to October figures for open SFTs.

However, some areas of challenges remain concerning data quality for both EMIR and SFTR.

ESMA aims to increase its focus on potential non-reporting in the future for both EMIR and SFTR. 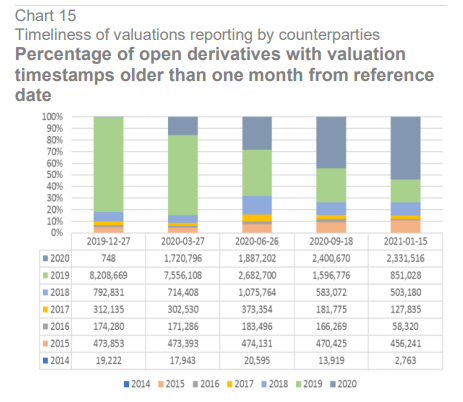 One of the areas of concern ESMA covered was non-reporting of valuations of open positions. Over various periods from 2019 to the beginning of 2021 that they checked, between 4 to 11 million open positions (see chart) were found to have their most recent valuation timestamp more than a month old.

A common problem cited by ESMA related to EMIR reporting are non-maturing derivative positions that aren’t updated with Termination messages after they are closed. These trades remain open on the books of the Trade Repository. As such, when reviewed by ESMA, they appear as open positions that lack recent valuations. Due to their causing incorrect overall exposure figures, ESMA has been actively engaging with NCAs to contact firms in relation to open positions. Valuations have also been part of the regulator’s ‘thematic reviews’ in 2020 along with collateral reporting.

Among the activities of Trade Repositories is reconciliation of submissions to pair trades. A trade is deemed ‘Paired’ when ID of counterparty, ID of other counterparty and Trade ID are matched between opposite legs of a transaction. According to ESMA, as of January 2021, 53% of all submissions were paired. This compares to 40% in February 2020. (In comparison, data collected by IHS Markit both internally and from TRs has shown pairing rates for SFTR at about 80%). While improving under EMIR, ESMA cited needs for improvement. They mentioned two factors affecting pairing rates. One is the lack of a shared Trade ID being used in submissions by both counterparties. The other issue is a mismatch between counterparties where one firm reports on a Trade level and other on a Position level.

ESMA’s data show that since going live in July 2020, SFTR submissions have steadily improved. After 9% rejection rates in July, they declined to well below 2% in January 2021 (see chart). This has occurred even as submissions at the end of 2020 more than doubled since August. 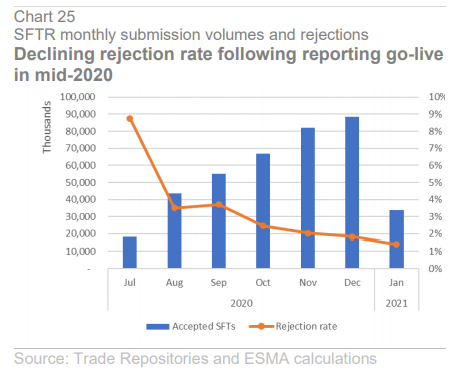 For both EMIR and SFTR,tests will focus on timeliness, format and content consistency with the rules through the rejections, and unpairing.

For 2021, ESMA and NCAs have agreed to carry out two rounds of data quality reviews based on samples. For SFTR, the tests will be much lighter than for EMIR, they will focus on format and content reporting, timeliness of reporting, and reconciliation of reported data by TRs.

IHS Markit is happy to support and assist participants for those data quality reviews, leveraging on MIS analytics possibilities and providing our participants the ability to closely monitor and control their reporting, pairing and reconciliation. 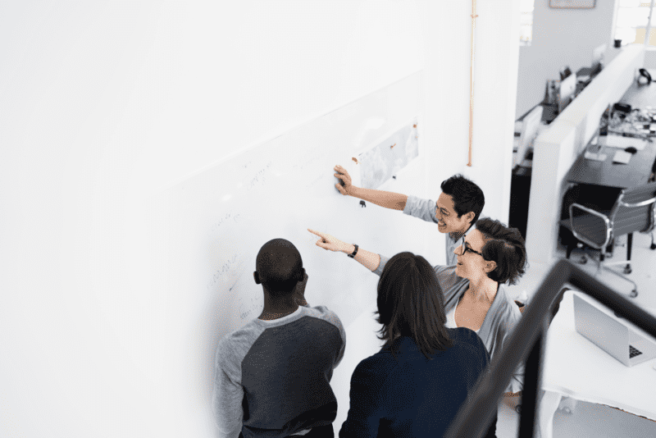