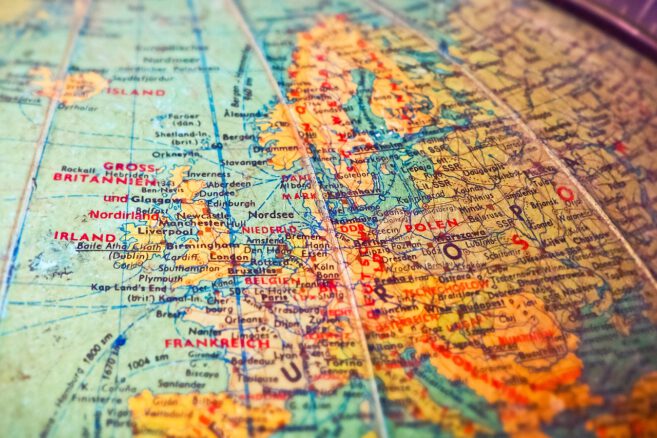 Earlier this month, ESMA published their 2021 EMIR and SFTR data quality report. After our initial blog this week focused on EMIR results, today we take a look at ESMA’s review of SFTR data. 2021 was an important year for SFTR data quality as it was the first full year of submissions following the initial 2020 phase-in of reporting. Also, 2021 coincided with Brexit taking effect and the removal of UK data from ESMA’s review.

The annual SFTR report is part of ESMA’s Data Quality Action Plan (DQAP) under EMIR and the Data Quality Engagement Framework (DQEF) under SFTR. Similar to EMIR, reporting volumes dropped 50% in 2021 compared to the end of 2020 due to Brexit. Overall, and average of 49 million lifecycle events are reported for SFTR each month.

Among the types of SFTs, Securities and Commodities Lending (SLEB) was the most common reported transa ction, followed by Repos, Margin Lending and Buy-Sell back trades. At the end of 2021, SLEB’s accounted for 70% of open transactions.

With SLEBs leading the way, it was no surprise that Modification and Valuation Updates composed the bulk of reported SFTR lifecycle events, with the two covering 70% of Action Types. 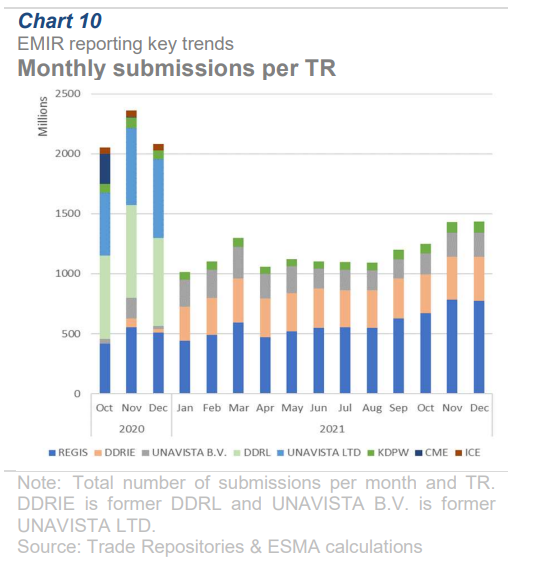 At over 80% of reported submissions, the DTCC trade repository (TR) averaged over 41 million monthly records. This was followed by UnaVista at 5 million, Regis TR at 3 million and KDPW at 0.1 million (see chart). With UnaVista closing their SFTR TR at the end of 2021, the DTCC is currently the only firm operating a repository under SFTR in the UK. As such, the DTCC’s overall EU/UK control of SFTR reported volumes is probably over 90%. It will be interesting to see how much of UnaVista’s market share, the other two TRs were able to capture for 2022.

Glass half full or half empty

In the report, ESMA brought focus that various completeness, accuracy, and timeliness (CAT) figures were similar to that of EMIR reporting. The optimistic viewpoint is that after only a year and a half of live reporting, SFTR data quality has already caught up to EMIR which has existed since 2014. On the other hand, one can take the stance that SFTR would be expected to operate more efficiently than EMIR due to better internal frameworks that firms have in place for data capture and creating reports due to experience with both EMIR and MIFID transaction reporting.

The ESMA report found that errors plaguing EMIR also exist with SFTR. Examples are similar rates of just below 10% for late reporting, 60% Pairing rates (more on this below) and cases of closed SFT with no termination message provided. However, a deeper look at individual stats shows positive trends of data quality for SFTR compared to EMIR where many 2020 problems remained in 2021.

Some of the positive trends include:
Rejections – As seen in the chart below, SFTR rejection rates at TRs has been steadily declining since May 2021. According to ESMA, their view is the improved rejection rates are due to joint work between TRs and NCAs to focus on counterparty improving data quality of submissions. 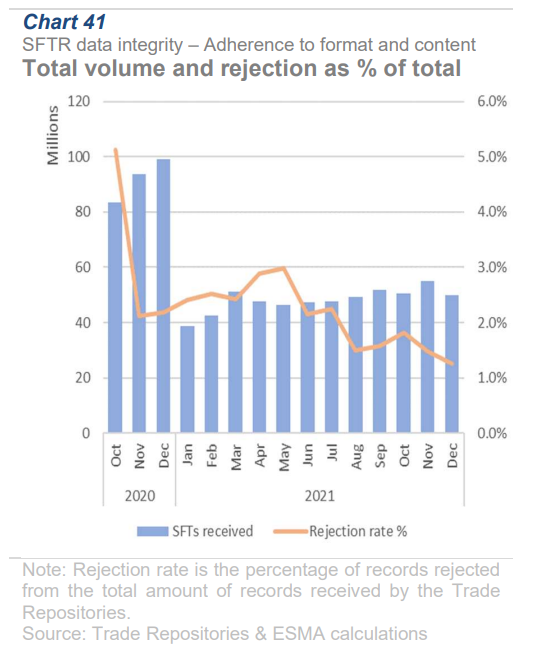 Timeliness – Similar to EMIR, late reporting for SFTR has been steadily below 10% and declining as the year went on (see chart below, spikes are due to holiday periods and weekends when T+1 calculations from the review don’t take into account the weekends). Despite the positive trends, ESMA did raise issues occurring in certain countries, specifically Greece, France and Italy, where late reporting is well above the 10% range. While the countries were different, late reporting in EMIR also was more prevalent in specific countries. 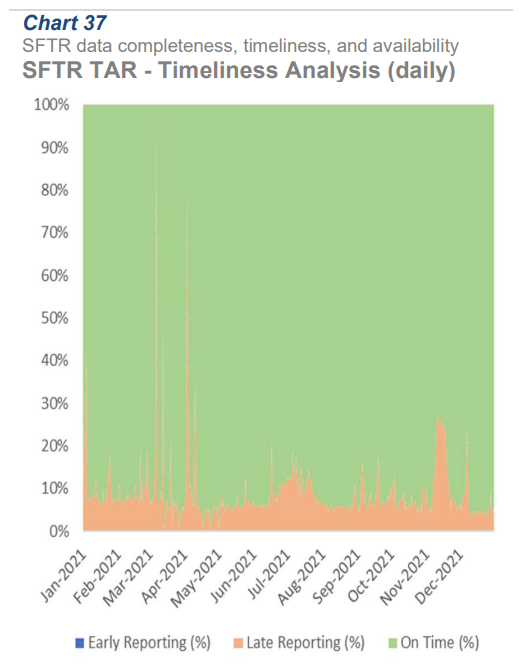 As seen in the chart below, SFTR ended 2021 with pairing rates above 60%. These are submissions where a UTI being submitted is able to be reconciled with the counterparty using the same UTI for their submission. In their statements, ESMA looked encouraged at the results along with the continuing improved trends. 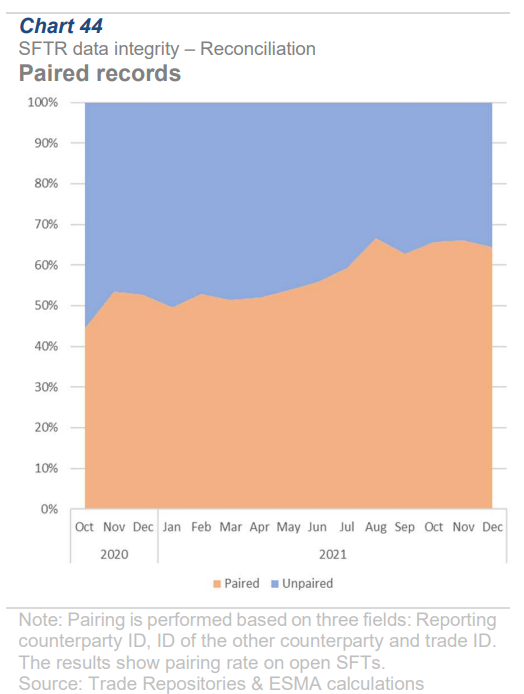 Where they still saw work to be done is fully matching of field information between parties. Loan data had the best matching results as matching rates ended 2021 at nearly 50% from 30% at the end of 2020. Most of the improvement took place in Q4 2021. While ESMA didn’t provide an explanation for the end of the year improvements, they occurred during a period when a large reporting entity had applied corrections to terminate a large number of open SFTs that had been closed but left open at their repository (more on this below).

Seeing lower reconciliation was the collateral component of SFTR submissions. As seen in the chart below, matching rates for collateral values ended the year around 25% after being below 10% to start 2021. Similar to other parts of reporting, reconciliation of collateral fields also varies per country and TR. As such, it can be expected that as part of the SFTR reviews, ESMA will be working with NCAs and TRs to better understand what are the root causes of the mismatches in order to improve results. 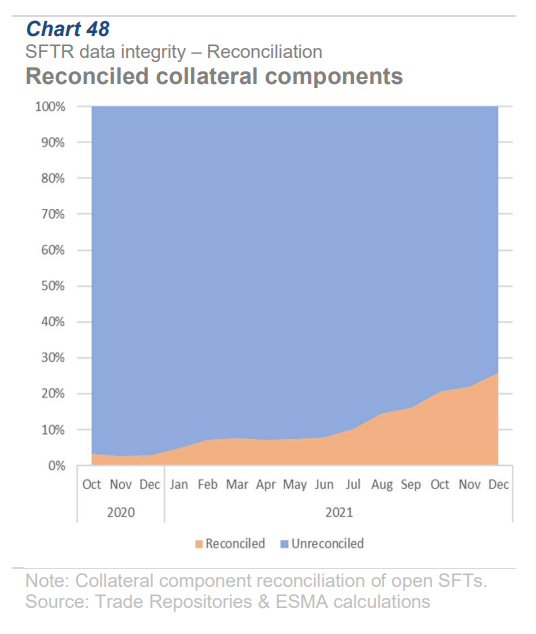 One item of focus for EMIR are ‘stale’ positions. These are cases where a transaction is reported as open but a new valuation message hasn’t been reported in 15 or more days. According to ESMA, in these cases there is a likelihood that the positions has been closed but a termination message hasn’t been submitted. Due to high numbers of stale positions at the end of 2020, ESMA and NCAs put a greater emphasis on the problem with NCAs alerting reporting parties of the problem. The result was a reduction of open positions with state valuation messages at the end of 2021.

For SFTR, non-terminated open positions also appears to be an issue that firms needs to reconcile for. As seen in the chart below, there was a steady increase in open SFT positions throughout 2021 before declining sharply in November. According to ESMA, this was due to errors from a single reporting party that was rectified with action taken by the firm’s local NCA. Overall, knowing that the problem exists in EMIR and already let to a spike in open SFTs under SFTR, it can be believed that ESMA and NCAs will be keeping their eyes on this problem. 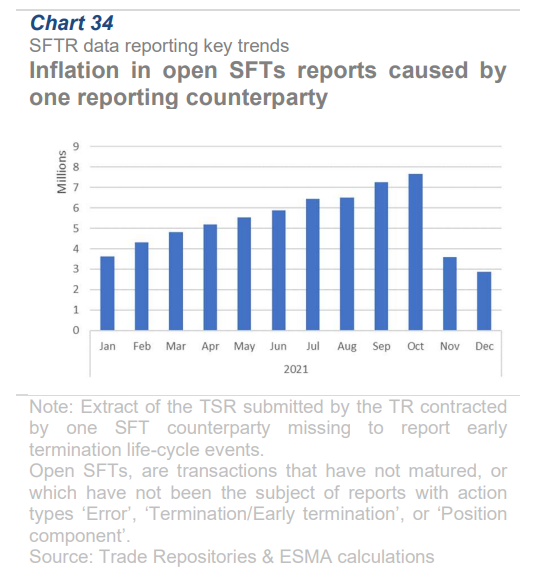